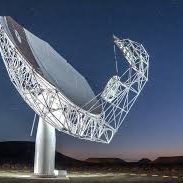 I will summarise the results of our recent paper (Delhaize et al., 2021) on the discovery of two giant radio galaxies (GRGs) in the MeerKAT International GHz Tiered Extragalactic Exploration (MIGHTEE) survey. GRGs are the largest single objects in the Universe and are relatively rare, with fewer than 850 currently known. Only around 7% of these have sizes greater than 2Mpc, yet we have detected two such objects within a 1 square degree field in MIGHTEE-COSMOS Early Science observations. Only the cores of these GRGs were clearly visible in previous high resolution observations with the VLA. However, the unprecedented surface brightness sensitivity of the new MeerKAT telescope allowed the diffuse emission of the large-scale jets and lobes to be detected for the first time. We calculate a very small probability of finding two or more such GRGs in the field, supporting the hypothesis that the sky density of GRGs is likely much higher than previously thought. This could have important ramifications on our understanding of the AGN duty cycle and the impact of the radio jets in the evolution of the host galaxy. The two GRGs presented here may be the first of a new population to be revealed through surveys like MIGHTEE, which provide exquisite sensitivity to diffuse, extended emission.