Why don’t you build a radiotelescope?

40 years of radio astronomy in Bologna 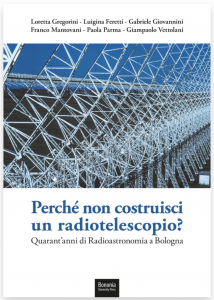 English version can be downloaded at this link.

Italian version can be downloaded or purchased in paper format at this link.

This history of the Institute for Radioastronomy from its origins until the year 2000 was stimulated by the memories and writings of Marcello Ceccarelli, Carla and Roberto Fanti and Giancarlo Setti. It was enriched with the contributions of Jan Brand, Antonino Ficarra, Liliana Formiggini, Isabella Gioia, Gavril Grueff, Stelio Montebugnoli, Mauro Nanni, Nino Panagia, Goliardo Tomassetti, Tiziana Venturi and the same authors of the book.

From the birth of the ROUB group (Radio Observatory of the University of Bologna) to the Institute for Radioastronomy, the scientific and technological projects developed by the researchers have been numerous. The volume traces the most representative lines of research which best demonstrate the growth of astrophysical and cosmological skills that over the years have led the Institute for Radio Astronomy to play an important role in the international arena. Some facts that have been drivers of success for the IRA are also highlighted: the very close connection between radio astronomy research and technological development, the strong interaction with the University even after the establishment of the CNR Institute, and the opening of the Institute towards research areas that are not purely radio astronomy.