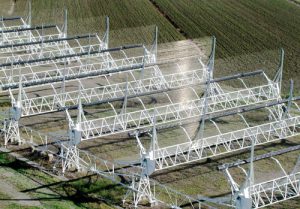 A.  Parabolic cylinders in the N-S branch of the Northern Cross

IRA has been very active in the development and implementation of technologies for low-frequency arrays. Starting from the experience gained on the Northern Cross interferometer, recently reengineered to participate in the EUSST project, IRA has achieved a leading role in the development of LOFAR and SKA-LOW.

The Northern Cross as a test bed 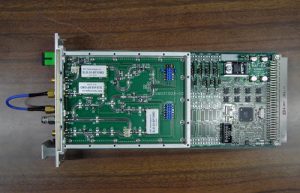 IRA has a long and well-established tradition with low-frequency arrays, thanks to the Medicina Northern Cross interferometer. Since the beginning of the Italian adventure in the SKA project, with the participation in the SKADS EC-FP6 program, IRA has contributed to the design of low-frequency RF receivers (<2 GHz), both for the Italian BEST prototype and for EMBRACE (Electronic Multi-Beam Radio Astronomy ConcEpt). The latter is one of the technological demonstrators for the European concept of SKA, consisting in a 300 m2 array in Westerbork (Holland) and a 100 m2 array located in Nancay (France). For EMBRACE a low-cost, high-performance, reliable, tunable 400-1600 MHz unit has been developed entirely by IRA; it performs double conversion (up and down) to and from the 100-200 MHz IF band. Since the first Italian prototype, dating back to 2004 and called BEST-1, IRA has introduced the RFoF (RF over Fiber) technology, able to transport the signals collected by the array to a single central point, even several tens of kilometers away, for subsequent conversion and/or processing. After about 15 years of work in this field, this technology has been selected for its use in SKA1-LOW and constitutes one of the key elements in the AAVS1 and AAVS2 verification systems, recently installed in Western Australia, by the international consortium AADC (Aperture Array Design Consortium).

The Northern Cross as a new instrument 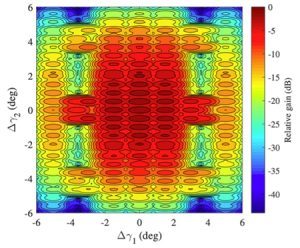 C.  Beams generated within the field of view of the Northern Cross

The update of the Northern Cross was not only aimed at designing and testing technologies for new radio telescopes (such as SKA). The renewed Cross is now an operating instrument: it has been selected to contribute, within the EUSST project, to the monitoring of space debris. It also performs FRB and pulsar observations. In addition to the changes made to the antennas and the introduction of new analog receivers, complex data processing techniques have been developed. To increase the field of view of the array of parabolic cylinders that make up the N-S branch of the Northern Cross, each focal line of 64 half-wave dipoles was divided into 4 independent portions (16 dipoles each). This operation allowed, with minimal mechanical changes, to quadruple the field of view of the instrument, raising it to about 30 square degrees. The current configuration consists in 32 parabolic cylinders – arranged in N-S direction – each equipped with 4 receivers, thus forming a 32×4 array. The same modifications are expected to be also applied to the remaining 32 cylinders of the N-S branch, reaching a 64×4 array. Thanks to the above-mentioned characteristics, it is possible to electronically generate different pointings (radio beams) within the field of view of the instrument. A sort of “radio camera” is obtained, composed by a matrix of “pixels”. In radar observations of space debris, the Cross works as the receiving component: it detects the radar echoes of bodies in low orbit which, hit by radio waves emitted by a transmitting antenna, cross the field of view. This allows to achieve great precision in the description of the object trajectory. The acquisition and computing system consists in new back-ends based on the TPM boards (Tile Processing Module), developed for SKA-LOW, and high-performance workstations. The multi-beam was created in collaboration with the University of Malta, while the orbital determination software for EUSST results from the cooperation with the Politecnico di Milano.