A.  The first LFAA complete station consisting of 256 antennas

The Square Kilometre Array (SKA) project is an international effort to build the world’s largest radio telescope. With hundreds of thousands of antennas installed in Australia and South Africa, SKA will provide unprecedented sensitivity and observing speed in the radio band. Italy is one of the 13 countries that joined the SKA Organisation. IRA personnel are involved in the design and production of SKA, and in all its scientific cases: from cosmology to magnetism and general relativity, from the evolution of galaxies to the detailed study of our Galaxy. 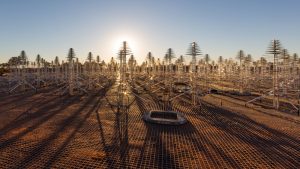 B.  The first complete LFAA station, consisting of 256 antennas

The Low Frequency Aperture Array (LFAA) is the lowest-frequency section of the SKA. Installed at the Murchison Radio astronomy Observatory, in Western Australia, it covers the 50-350 MHz frequency band. Once completed, it will be composed by ~130,000 antennas, producing an amount of raw data equivalent to five times the worldwide Internet traffic. This array will allow us to study one of the most interesting periods of the Universe, looking back to its first billion years, providing valuable insight into star and galaxy formation, dark matter and dark energy. The Italian network involved in LFAA is led by INAF-IRA and includes both INAF and non-INAF collaborators, distributed throughout the national territory: Arcetri Astrophysical Observatory, Catania Astrophysical Observatory, Institute of Space Astrophysics and Cosmic Physics of Milan, the Universities of Bologna and Florence, the Institute of Electronics, Computer and Telecommunication Engineering (IEIIT) of the National Research Council and the Politecnico di Torino. Within the LFAA project, Italy leads the work package for the development of analogue receiving parts using optical technology, while also playing an essential role in designing and testing acquisition systems for analog-to-digital conversion of radio signals. Moreover, an Italian team has been taking part to the deployment and installation of the two SKA low-frequency prototypes arrays named AAVS1/2 (Aperture Array Verification System 1/2) These are composed by “SKALA2” generation antennas, designed and manufactured by the University of Cambridge, and by the current prototype “SKALA4.1AL”, designed and made in Italy. INAF provided the receiving systems also for EDA2 (Electronic Demonstrator Array 2), an array consisting of dipoles similar to the ones employed at the Murchison Widefield Array precursor telescope. 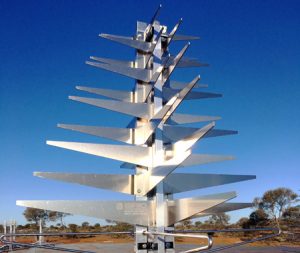 C.  Detail of the SKALA4.1 antenna

The newest prototype design of the LFAA antenna, SKALA 4.1AL, has been developed by INAF in collaboration with IEIIT and the Italian industrial partner Sirio Antenne, starting from the common electromagnetic design SKALA4, in turn developed in collaboration within AADC. SKALA 4.1AL is a dual-polarization log-periodic antenna, resembling a Christmas tree, designed as a broad-band sensor. The Italian team also worked on developing a low-noise amplifier (LNA), in collaboration with the Korean company Asb, installed on top of the antenna, which boosts the faint astronomical signal being received.  SKALA 4.1AL prototypes are currently being tested in a full station of 256 antennas, called Aperture Array Verification System 2.0 (AAVS2), whose installation was completed in November 2019 at the Murchison Radio Observatory by IRA engineers and technicians, with the support of Australian colleagues. IRA has also been involved in the design of receivers for low-frequency (< 2 GHz) systems since 2004 and has introduced the so-called RFoF technology (RadioFrequency over Fibre), which allows remote antenna arrays to transport all signals into a central facility; RFoF today represents a key component of the recently-deployed. 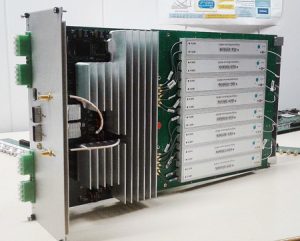 The IRA-INAF team also led an international collaboration aimed at designing a digital/analogue system for the acquisition and processing of the received radio signals (Tile Processing Module, TPM), developed in collaboration with the Italian companies Sanitas Eg, Optel, Protech and Leonardo. This task included the development of a drone-based system (Unmanned Air Vehicle, UAV), employed to test the antennas. The UAV is equipped with a transmitting antenna (e dipole) and a precise satellite positioning system;  such devices make it possible to accurately test the behavior of the LFAA prototype antennas from a distance of hundreds of meters. The Italian team visited several times the Murchison Radio astronomy Observatory to conduct such measurement campaigns on the LFAA prototypes, in collaboration with the University of Malta and the Australian International Centre for Radio Astronomy Research.