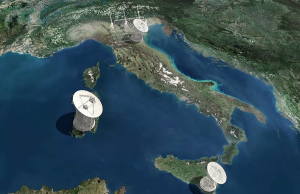 INAF manages four radio telescopes that have contributed to major astronomical discoveries in the last decades. IRA operates three of these facilities: the Northern Cross interferometer and the two 32-m dish antennas, in Medicina (Bologna) and Noto (Siracusa).

Since their construction in the ’80s the IRA 32-m antennas regularly take part in the observations of international VLBI networks and are used by the national and international scientific communities also as single-dish telescopes, to perform continuum, polarimetric and spectroscopic studies. The Northern Cross interferometer is nowadays actively involved in the European Space Surveillance and Tracking project for radar observations of space debris.

Thanks to the IRA long-standing expertise in e-VLBI and software correlation techniques, the Medicina and Noto 32-m antennas together with the fourth INAF radio telescope, the 64-m Sardinia Radio Telescope operated by the Cagliari Astronomical Observatory, regularly observe as a three-station national interferometer often joined by other dishes in Europe and East-Asia.

Information on how to apply for observing time at the Italian radio telescopes can be found here.

You can find more info on each individual radio telescope at the dedicated websites:

and have a look in real time to the telescopes through our webcam systems: