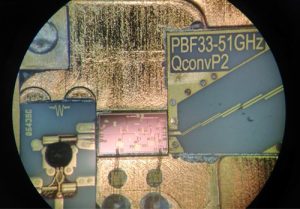 Fig. A – Photo under the microscope of the connections between mixer (left), amplifier (center), RF filter (right)

To obtain increasingly sensitive, accurate and fast observations, an incessant mechanical and electronic design work is necessary. IRA is active in the development of technologies for dish telescopes, such as: multi-feed receivers (which speed up the creation of maps and improve calibration), technologies to recover the gravitational deformations of the antennas, new-generation receivers (up to 116 GHz). The main objective is to bring the existing INAF radio telescopes to higher frequencies, opening to new scientific projects. 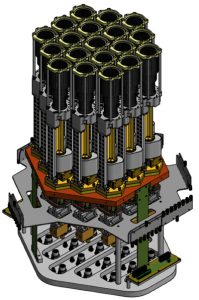 Fig. B – Drawing of the assembly inside the cryostat of the 33-50 GHz 19-pixel receiver

Multi-feed radio frequency receivers are multiple receiving chains (up to tens of units), placed as close as possible to each other. They satisfy multiple scientific needs, such as the production of extended radio sky maps, in less time and with a better accuracy with respect to the classic single- or double-feed architectures, of which this technology can be considered an evolution. The receiving chains simultaneously observe in the same frequency band and are more easily produced at frequencies greater than 18 GHz, since the size of the waveguide part (feeds, polarizers and orthomode transducers) reduces with the increasing frequency. From this point of view, an architecture that uses only waveguides is preferable. If, on the one hand, this allows for a much better overall performance with more compact dimensions, on the other it requires greater precision in the mechanical design. The mechanical and electrical complexity of the whole device is due to the multiplication of the components in a small cryostat cooled to 20 K: to power the cryogenic amplifiers, it is necessary to route more than a hundred very thin wires; the distribution of the local oscillator signal to the mixers makes use of planar and microstrip technology. 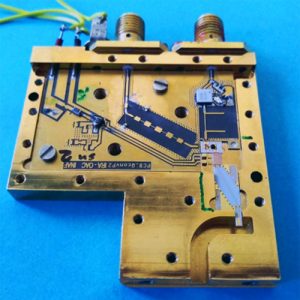 Radio astronomy receivers have traditionally been built by associating each elementary function with a specific component, physically separated from the others and linked to them via a coaxial connector or, for higher frequencies, a waveguide. The era of multi-feed receivers poses new challenges, first of all the obligation to contain the parts of the first receiving stages inside a cryostat of limited dimensions, cooled to 20 K. To meet this need, integrated circuits have been developed on materials that allow the propagation of electromagnetic waves and electric currents. What could typically be included in a box of several square centimeters, can now be carried out on areas of a few square millimeters: amplifiers, mixers, interfaces for routing the input and output signal, filters and many other devices are now available and bonded not through connectors or waveguides, but with tiny welds, so small that they must be performed under a microscope. Thus, the essential parts of a receiving chain can all be contained in a box, the size of which once could have accommodated only one elementary function. In this way the multiplication of the receivers can take place in a very compact design.

Upgrade of the dishes up to the 3-mm band 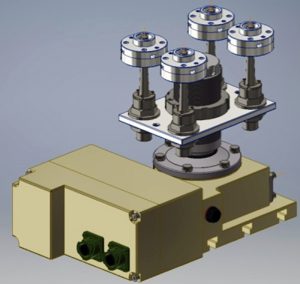 Fig. D – Drawing of the electromechanical actuator for the active surface

Today’s technologies allow to increase considerably, at a low cost, the maximum operating frequency of an already existing radio telescope. This paves the way to interesting scientific applications, without implying the much higher costs and long times required for the construction of a new antenna. Currently the 32-m Medicina dish can work up to 26 GHz, with an antenna efficiency degradation of about 60% compared to the maximum value (which is obtainable at 5 GHz). An Active Surface would allow to maximize the efficiency at 26 GHz, to make the 43-GHz one almost optimal and to observe up to 116 GHz with a degradation of 60% compared to the maximum, restoring the existing proportion but at a frequency almost five times greater. To create an Active Surface, the panels of the primary mirror must be replaced with new ones with a surface rms of 65 μm. A new secondary mirror, with rms of 50 μm, needs to be built, together with 240 electromechanical actuators to move the panels according to a map of the gravitational deformations, measured a priori, of the mirror support structure. These actuators will be interconnected and interfaced to a management network that remotely controls the system as the antenna elevation changes. Together with the Active Surface, new receivers will be built, in order to observe simultaneously in the bands from 18 to 116 GHz by means of suitable beam-separation optics. 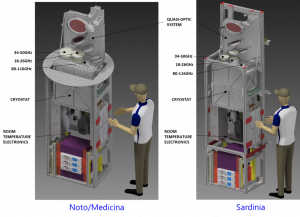 VLBI (Very Long Baseline Interferometry) three millimeter observations are heavily affected by tropospheric phase fluctuations that reduces the coherent time and, consequently, the sensitivity of the observations. It has been demonstrated that high frequency phase fluctuations can be tracked and compensated using lower frequency data which are relatively stable. The design of a receiver able to acquire data at three different frequency bands simultaneously on the same source overcomes the problem, provided that a suitable compact solution arranges in the same cryostat three different receiving chains at 18-26 GHz, 34-50 GHz and 80-116 GHz. Adding an optical system made by mirrors, lens and dichroic filters allows to split the very wideband incoming radio beam into the three bands. Such a solution will allow to equip this novel instrument on a number of millimeter radiotelescopes with limited space in the focus cabin. This system was originally conceived and achieved by KASI (Korea Astronomy and Space Science Institute) and a collaboration KASI-INAF will provide the Italian radiotelescopes at Medicina, Noto and SRT of three similar Compact Triple-band Receiver (CTR) in 2022.