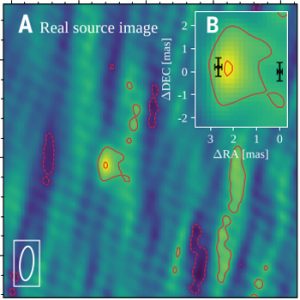 A.  Global VLBI radio image of the electromagnetic counterpart of the gravitational wave GW170817

Thanks to the advent of instruments with large fields of view and great surveying capabilities, more and more classes of rapidly variable sources have been discovered. Gamma-ray bursts (GRB), fast radio bursts (FRB), and gravitational waves (GW) allow astronomers to probe highly energetic and unpredictable environments, such as those related to the death of massive stars or the merger of compact objects. In some cases, a clear view of the nature of the systems producing these short events is still lacking. IRA is involved in high-angular-resolution radio observations, which play a key role in imaging these systems.

FRBs are very short (millisecond duration) flashes of continuum radio emission showing high dispersion measure, well in excess of the Galactic contribution expected in the direction in which the FRBs are discovered. This fact indicates that the bursts have an extragalactic origin. FRBs are one of the mysteries of astrophysics, as their discovery at the beginning of this century came totally unexpected. It is uncertain whether  they form a homogeneous class or need finer classifications. In order to shed light on their nature, it is important to increase their sample size to establish their population properties (luminosity distribution, spectra etc.) and compare them against theoretical models. Thanks to its large, instantaneous field of view, the Northern Cross interferometer is currently being used to survey the sky and increase the number of known FRBs. Although most FRBs are unique events – indicating their connection with a cataclismic event -, a growing number of repeating FRBS has been recently observed. Repeating FRBs are particularly useful as they offer the possibility of carrying out pointed high-angular resolution observations, such as with VLBI, which might be able to localise them. An accurate localisation is a fundamental step to understand the environment surrounding the phenomenon, providing indications on the origin of the FRB and on its physical properties.

After having been predicted by Albert Einstein in 1915, the existence of gravitational waves was finally demonstrated one century later, when dedicated interferometers revealed for the first time a very small perturbation of the space, following the merger of a pair of black holes several Mpc away. This has opened an entire new method to investigate the Universe and probe phenomena that are otherwise unaccessible. Whereas most of the events discovered by the present day GW detectors are mergers of binary black holes, and therefore not expected to give rise to observable electromagnetic radiation, in August 2017 a merger of binary neutron stars was detected for the first time, simultaneously in GW and in electromagnetic radiation. IRA was involved in high-sensitivity, global VLBI observations which revealed the details of the jet formed after such event, demonstrating the potential of multi-messenger astrophysics. Besides allowing us to understand the physics of the events themselves, the comparisons of the GW and electromagnetic signals could bring valuable information on the expansion velocity of the Universe and on Hubble’s constant.

GRBs are short flashes of highly energetic (keV-GeV) emission produced in the stages following either the explosion of a massive star or the merger of two compact objects, such as a pair of neutron stars. In these events, a relativistic jet is launched, piercing through the dense surrounding material. When the line of sight lies within the jet opening angle, the strong amplification (beaming) of the emitted radiation makes the event clearly visible across most of the electromagnetic spectrum. This makes GRBs ideal laboratories to study the final stages of stellar evolution, the regions surrounding very dense and compact stellar remnants, and the physics of relativistic jets. At lower frequencies, such as in the radio band, the jet emission remains detectable for much longer time scales, up to months. IRA is involved in VLBI follow-up observations, which are a unique tool to directly image the structure of the jets and to monitor their evolution, providing crucial information on the physics of the jet, of the surrounding medium and on their interplay. Moreover, since beaming allows us to observe GRBs up to cosmological distances, they are also excellent probes of the early universe conditions and of the intervening environment. 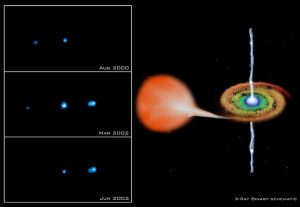 B.  Left: Chandra images revealing the evolution of large-scale X-ray jets traveling at near the speed of light. Right: Illustration showing the gaseous matter being pulled from a normal star to form a disk around the black hole and create bipolar jets of high-energy particles

Microquasars are binary systems formed by a compact object – a stellar black hole (BH) or a neutron star – and a companion star, from which the compact object acquires matter. The accretion process is accompanied by discrete ejections of plasma (jets) moving at relativistic speed, in a similar way to what is observed in some AGN hosting supermassive BHs. In microquasars, however, the typical timescales of the accretion and ejection phenomena are much shorter than in AGN, opening to the possibility of observing their evolution in real time. At IRA, in collaboration with international groups, we use multi-wavelength observations, from the radio (JVLA, ATCA) band to the X-ray (Chandra) band, of the jets of microquasars, in order to investigate their physics and the nature of their interaction with the interstellar medium.