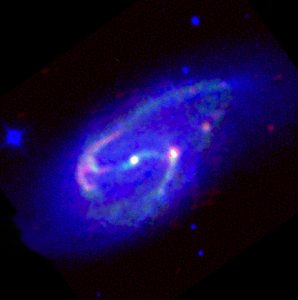 The interstellar medium (ISM) is of vital importance for the formation and evolution of galaxies since it represents the environment from which stars are formed. Multi-wavelength observations of nearby galaxies allow for a detailed study of the ISM, consisting mainly of hydrogen in different phases (from hot ionized to cold molecular gas), dust, cosmic rays and magnetic fields. IRA is involved in studies of dust and gas components, as well as thermal and non-thermal emission through radio continuum, exploiting the most powerful radio facilities at different frequencies currently available, such as ALMA, JVLA, and LOFAR. 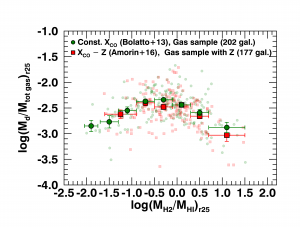 Star formation happens within molecular clouds in the ISM, when dense regions collapse to form stars. The physical processes leading to this collapse can be studied in details in the individual star-forming regions of the Milky Way, while integrated measurements such as the star-formation rate (SFR) extend the study to the most distant galaxies. Nearby galaxies offer the opportunity to study star formation on large scales, while still being close enough to reveal the local details, thanks to the unprecedented combination of sensitivity and resolution offered by the current observational facilities. Multi-wavelength observations of nearby galaxies enable us to trace the different phases of the ISM, and are essential to calibrate the SFR indicators used in high-redshift studies. This detailed characterization of ISM is possible for nearby galaxies spanning different morphologies (elliptical, spiral and dwarf galaxies) and other main galaxy properties (e.g., gas-phase metallicity, AGN) therefore also providing precious constraints for theoretical models of galaxy evolution.  At IRA astronomers are involved in studies of dust and gas components, as well as thermal and non-thermal emission through radio continuum. 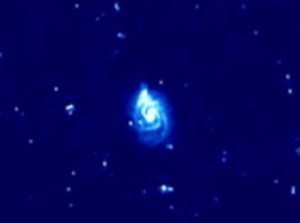 Magnetic fields play an important role in the ISM of spiral galaxies: they contribute to the total pressure, influence star formation processes at every scale, and may also affect the formation of spiral arms and outflows. They have typically been observed through synchrotron emission in total intensity and polarization. This emission is generally associated with massive star-formation processes: massive stars end their lives in supernovae explosions accelerating ultra-relativistic electrons, which spiral in the magnetic field. A new perspective on the study of magnetic fields in nearby galaxies is now made available by the unprecedented combination of high resolution and sensitivity in full polarization mode offered by ALMA, which enables to map the structure of interstellar magnetic fields in the cold gas of nearby galaxies, through observations of dust continuum polarization at the scale of giant molecular clouds. This is crucial to understand how magnetic fields influence gas dynamics and in particular their role in regulating star formation, driving galactic outflows and fuelling galactic nuclei. Both tracers are studied at IRA by exploiting radio facilities at cm (JVLA, GMRT and LOFAR) and mm (ALMA) wavelengths.

Gravitational interactions between galaxies lead to asymmetric gas flows, compression, shear, enhanced turbulence and outflows, which can modify the structure of galaxies and their star formation processes. A multi-wavelength study of nearby compact groups, relating the observed morphological and kinematic disturbances of group members, their star formation activity and history with the evolutionary history of the groups, is essential. Radio observations at low frequencies, allow to study the low-energy relativistic electron population, tracing the non-thermal radio emitting structures further away from the areas of relativistic particle supply, like in the halos or in tidal tails. The involvement of IRA researchers in LOFAR gives access to new low-frequency data on nearby compact groups. Galaxies in denser environments are affected by ram pressure stripping (RPS) of disk gas, due to interaction between the galaxy ISM and the intergalactic medium. Neutral gas studies have proved the efficiency of RPS in clusters of galaxies, but also tracers of other gas phases (e.g., Hα emission, X-ray) and even of young stars (UV, blue light) are used as complementary methods. At IRA, much interest is given to the presence of molecular gas in RPS tails, recently observed thanks to the high sensitivity provided by ALMA, but also to the possible radio continuum emission in the tails.