A.  Zoom in of the Lockman Hole of the LOFAR 150 MHz Survey Tier 2 fields. Superimposed is a graphic showing the evolutionary sequence in the growth of massive elliptical galaxies over 13 billion years

A key goal of modern astronomy is to understand the formation and evolution of galaxy populations and of their properties across a wide range of cosmic epochs. Despite a large observational effort, many fundamental unanswered questions remain about the rate of build-up of the stellar populations and black holes in galaxies, and the role of mergers or secular processes. One of the most crucial open issues regards the mutual interplay of galaxies and super-massive black holes (SMBH), and their possible co-evolution. IRA has a long-standing tradition in conducting radio surveys, dating back to the pioneering work performed with the Northern Cross interferometer in the early 1970s. Building on this well-established expertise, galaxy evolution studies at IRA are conducted primarily through the acquisition and analysis of wide-area and/or deep extra-galactic radio-continuum surveys at the major SKA pathfinders (JVLA, eMERLIN, ATCA-CABB, LOFAR, GMRT) and precursors (ASKAP, MeerKAT) in synergy with surveys at other bands.

Tracing the evolution of galaxies and AGN 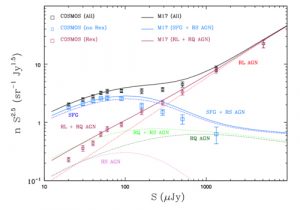 B.  Normalized 1.4 GHz differential counts of various populations of sources in comparison with models. Comparison between the recent modeling by Mancuso et al. (2017) and the VLA-COSMOS 3 GHz Large Project dataset (Smolcic et al. 2017)

Radio continuum extra-galactic surveys are emerging as a very promising tool for simultaneous galaxy and SMBH formation and evolution studies. The deepest radio fields are not only sensitive to star forming galaxies up to the epoch of the peak of their activity (z~2-3), but also probe for the first time the vast radio-quiet AGN majority. With the advent of LOFAR, ASKAP and MeerKAT, larger volumes of the Universe can be observed in order to investigate the role of the environment in driving the growth of galaxies and SMBH, and to better trace rare populations such as high-redshift radio galaxies. The latter can be used to probe the onset of the radio-loud AGN phenomenon in the early Universe (z>7). For many years IRA has been involved in deep radio surveys of the cosmological extra-galactic fields (e.g COSMOS, Lockman Hole, GOODS-N, etc.). In addition it actively participates and has leading roles in international legacy surveys ongoing with SKA pathfinders and precursors. IRA is also actively involved in multi-variate analyses of statistical samples of galaxies and AGN, which include extensive use of multi-wavelength (radio, IR, sub-mm, optical, X-ray) information. Astronomers at IRA are contributing to the development of state-of-the-art model implementations able to match the existing radio and IR observations of galaxies and AGN. Such models are used to simulate observations with future telescopes operating in the radio and IR bands, like the SKA, the Origins Space Telescope and the James Webb Space Telescope. 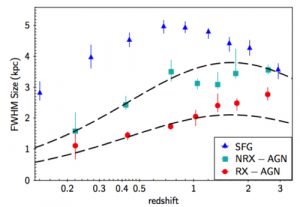 C.  Evolution of the linear size with redshift of sources in the VLA-COSMOS 3 GHz  sample

The AGN population probed by deep radio surveys significantly differs from what observed by historical radio surveys. Faint radio AGNs rarely display the large-scale radio jets and lobes, typical of classical radio galaxies, most of them being unresolved or barely resolved on scales similar to the host galaxy size. IRA is involved in a number of studies aimed at shedding light on the physical properties of the faint radio AGN population, with implications on the feedback mechanisms at work in such systems, and on the role played by them in galaxy evolution. Based on multi-band information, faint and compact radio AGN can be distinguished into two main classes: those hosted by passive early-type galaxies, and those hosted by disk galaxies showing AGN signatures (collectively referred to as radiatively efficient – RE AGN). The former typically display flat radio spectra, and can be considered as small-scale, low-power analogs of core-dominated radio galaxies. The latter have steep spectra, and the origin of their radio emission is hotly debated, most of them being radio quiet: it may come from star formation in the host galaxy or from some sort of low-level nuclear activity. VLBI observations and statistical multi-band studies both show that at least a fraction of RE AGN are dominated by nuclear activity also in the radio band. The most likely scenario nowadays is that RE AGN are composite systems where star formation and AGN-triggered radio emission can co-exist, over a wide range of relative contributions.

The interplay between star formation and nuclear activity at high redshifts 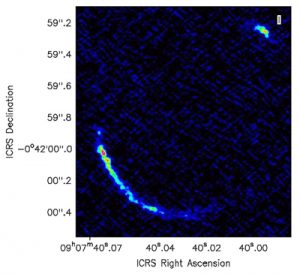 To properly understand the detailed process of galaxy formation and evolution there is an urgent need to identify and quantify the role of AGN feedback, not only through detailed studies in the local Universe, but also at high redshifts, where most of the accretion occurred. IRA is involved in studies aimed at a better understanding of the interplay between star formation and black-hole accretion at the epoch when both peak (z~1-3). Individual high-redshift sources can be observed at sub-arcsec spatial resolution using VLBI at GHz frequencies or through ALMA (sub-)mm (>100 GHz) observations: galaxy structures can be resolved and measured, and the interplay between nuclear and SF activities can be directly observed. The unique combination of long baselines (>100 km) and sensitivity offered by e-MERLIN is exploited to provide a spatially-resolved view of the innermost regions of high-z galaxies on larger statistical grounds.