A.  Various epochs in cosmic history, on the left, and probes from different types of cosmological surveys, on the right

The study of the global properties of the Universe still poses many open questions on several fundamental issues, spanning from its geometry, expansion law and constituents, to the origin and evolution of cosmic structures, diffuse medium and bound objects. The cosmological research at IRA concerns experimental, observational and theoretical topics. IRA research staff is deeply involved in the analysis of the cosmic backgrounds and of the cosmological surveys carried out at different frequencies, which are crucial to understand the evolution of the Universe from its early phases to the present time, including the ionization and thermal history from the dawn age to the reionization epoch.

B.  All-sky map of the temperature anisotropies of the cosmic microwave background

The analysis of the background radiations, either of intrinsically diffuse origin or resulting from the integrated contribution of unresolved sources, is of increasing relevance in cosmology. Our research in the radio background is devoted to the various imprints expected from the early phases of the Universe to the reionization age, to the radio source populations background signal, as well as to possible non-equilibrium phenomena. Our studies on cosmic microwave background are oriented to the new windows represented by the joint analysis of temperature and polarization anisotropies, including B-modes from primordial gravitational waves, and by the tiny deviations from a blackbody spectrum. We are also interested in the far-infrared background, as it provides a unique view of the dust-obscured star-formation phase of galaxy evolution.

IRA is deeply involved in cosmological surveys of the diffuse backgrounds and of the galaxies distributions. They represent powerful tools to study physical processes across cosmic time, cosmological models and their parameters. The Institute is actively contributing to the current progress in radio surveys based on several operational facilities (e.g. SKA precursors and pathfinders, such as LOFAR, ATCA, JVLA) and to the cosmology and fundamental physics themes for future SKA surveys. We are working on the optical/infrared survey that is planned to be performed in the next years with the ESA Euclid satellite. Continuing the scientific exploitation of data from the Planck satellite, complemented by ALMA high-resolution observations, we are working for future microwave to far-infrared projects, mainly in the ESA vision context.

From the dark ages to the cosmological reionization

After the recombination era, the Universe passed through an almost neutral and dark age, followed by a phase when the radiation and thermal energy produced by early stars and galaxies was able to reionize the diffuse matter. Researchers at IRA are particularly interested in the study of the redshifted 21-cm line from neutral hydrogen, in both diffuse medium and galaxies. Its global signal, fluctuations and mapping provide tomographic views of these ages. Ionized matter, in both intergalactic medium and bound structures, produces instead free-free radio emission coupled to Comptonization distortions and anisotropies, particularly in polarization, that we study in the radio, microwave and sub-millimetre background. IRA is strongly involved in several related projects, like LEDA, HERA, LOFAR, SKA, Planck and future cosmic microwave background missions. 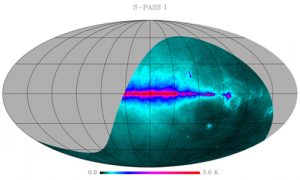 The comprehension of the tiny signals stored in cosmological surveys calls for a better knowledge of intervening astrophysical emissions, in total intensity and polarization. IRA staff is strongly interested in mapping and modeling the Galactic synchrotron and free-free radio emissions, through e.g. GMIMS and S-PASS surveys, in comparison with results at higher frequencies, e.g. from C-BASS, QUIJOTE and from space missions – as COBE, IRAS, WMAP and Planck – that also probe the Galactic dust and Zodiacal light emissions. At sub-degree scales, extragalactic sources and galaxy clusters, through the Sunyaev-Zel’dovich effect, produce the most relevant foreground. We are interested in improving our knowledge of their number counts, luminosity functions, polarization, evolution and correlation properties, integrated emission and fluctuations, and of the astrophysical and cosmological implications of gravitational lensing effects. 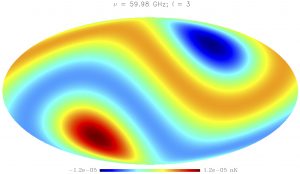 D.  Prediction of the anisotropy induced by the Solar System barycentre motion in the presence of spectral distortions: example of the octupole map (in Galactic coordinates and equivalent thermodynamic temperature) at ≅ 60 GHz in terms of the difference with the blackbody case, for a Comptonization distortion associated to reionization

Cosmological research at IRA is performed developing methods for theoretical forecasts and modeling, for simulations of the sky signals and of instrumental and observational effects, for the analysis of simulated and real data. A non-exhaustive list includes: analytical methods and numerical codes for the modeling of radio and microwave background power spectra and frequency spectra; modeling of Galactic foreground emissions and component separation methods; methods to merge high resolution maps from interferometers with coherent maps by single-dish surveys; methods to extract information on point sources below the survey detection level; power spectrum and parameter estimation methods; modeling and analysis of sky maps in multipole expansion.