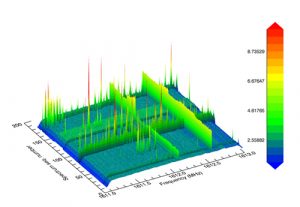 A.  Time-frequency waterfalls allow us to identify the different types of signals and trace their evolution.

Astrobiology is a multi-disciplinary branch that studies the conditions and environments in which life can form and sustain itself in the cosmos. The SETI project (Search for ExtraTerrestrial Intelligence), analyzing the radiation coming from the cosmos, is dedicated to the search for signals produced by extraterrestrial civilizations. As for SETI carried out in radio waves, the goal is to find artificial signals, identifying them in the midst of the large amount of natural radiation emitted by celestial bodies.

The discovery of thousands of extrasolar planets (including some similar to our Earth) within the limited radius of just a few thousand light years from us, made it even more sensible to ask the old question: “Are we alone in the Universe?”. Since the 70s of the last century, the SETI program has searched for an answer by relying on high-resolution spectral analysis of the radio signals coming from space. The research focuses mainly on monochromatic and continuous wave signals (i.e. a signal having very narrow bandwidth and no modulation) assuming that, if an alien civilization wanted to make its presence known, such a signal would be the most obvious type to use. A monochromatic signal is, in fact, easily recognizable, despite being immersed in a huge amount of background “noise” of both natural and instrumental origin. To be able to receive more complex, modulated and broadband signals, similar to those we use for our telecommunications (or more exotic), we need very sophisticated tools and techniques. To date, apart from a few suspects never confirmed, no alien transmissions have been detected. Perhaps the Square Kilometer Array will provide us with this opportunity.

At the IRA radio telescopes, in particular using the 32-m dish in Medicina, SETI has been implemented in parallel to the observations in progress, offering the possibility of acquiring data almost 24 hours a day and at extremely low costs. The analysis of the signal is performed with high-resolution spectrometers (tens of millions of frequency bins), in order to detect even minimal Doppler drifts – due to the motion of the planets or probes whence the radio transmission might come. If the classic Fourier transform was used for a long time, the KLT (Karhunen Loeve Transform) is now being implemented, taking advantage of the GPUs installed on the most performing machines. This type of processing is expected to detect any extraterrestrial signals, even when modulated in a complex way. Today the limitation is no longer constituted by computing power, but by the type of algorithm that is implemented to extract an unknown signal from the background “noise”. A challenge far from trivial, since it is difficult to identify something whose features are not known a priori. One of the most promising tools seems to be the analysis performed by assessing the entropy of the signal.