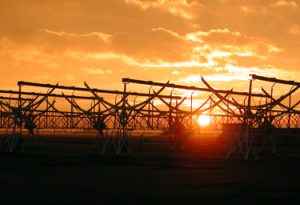 A. Some of the parabolic cylinders of the Northern Cross, employed for space debris radar monitoring observations.

Garbage also pollutes Space. Millions of debris orbit the Earth, and they can: damage the satellites, collide with each other – causing the multiplication of the fragments – re-enter in an uncontrolled way and represent a danger for astronauts. As today space activity – also of a commercial nature – is increasing, rules are established to reduce the production of debris and techniques are developed to monitor it and mitigate its effects. Our institute is involved in the European Space Surveillance and Tracking (EUSST) project and uses the large Northern Cross for radar observations of space debris.

Space debris: the severity of the problem

In the last decades, the number of man-made objects orbiting the Earth has dramatically increased. In around 60 years of space activities, more than 5450 launches have turned into around 42,000 known objects in space, most of which remain in space and are regularly tracked by the US Space Surveillance. Collisions and fragmentations events are assumed to have generated a population of so-called space debris with estimated numbers of around 34,000 objects larger than 10 cm, and 129 million objects from 1 mm to 10 cm. They can travel at speeds up to 27,000 km/h, fast enough to damage a satellite or a spacecraft, and are dangerous to astronauts during extravehicular activities. Also the re-entry of uncontrolled large space debris is a potential danger for the world population. The upper stages re-entry occurs nearly every week; among them, intact objects having a mass greater than five metric tons re-enter, on average, 1-2 times per year. 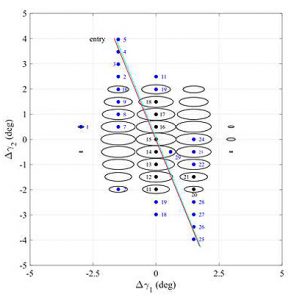 B.  The several beams (~ pixels) inside the array field of view make it possible to trace the fragment trajectory.

The uncontrolled re-entry of the Chinese space station Tiangong-1, in 2018, brought the topic of space debris to the attention of the general public. Yet specific programmes had already been started in 2014, when the EUSST Consortium was developed, in which eight European Union member States, including Italy, currently participate. The goal is to combine their capabilities to better locate, catalogue and monitor objects orbiting the Earth, in order to alert satellite operators about collision risks and inform the public administrations about any uncontrolled re-entries.  At the end of 2018, the EUSST sensor network consisted in 11 radars, 19 telescopes and 4 laser stations. Such network includes the Northern Cross, a radio interferometer built in Medicina in 1964, owned by the University of Bologna and managed by IRA. A large portion of this huge instrument has been completely refurbished in order to meet the requirements posed by the EUSST needs.

The Northern Cross is the receiving part of a bistatic radar, whose transmitter is located in a military area in Sardinia. The sensor operates in surveillance mode, detecting within its field of view any object of at least 10 cm orbiting at an altitude up to 2000 km, the so-called LEO (Low Earth Orbit).