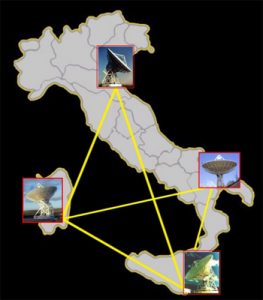 A.  The Italian VLBI network

Geodetic VLBI determines the Earth orientation parameters. It defines and realizes the International Celestial Reference Frame. It contributes to the definition of the International Terrestrial Reference Frame and is used to study the changing Earth, by investigating its geodynamics, atmosphere, gravitational field, etc.
The IRA Medicina and Noto antennas regularly participate in the IVS observational campaigns. IRA also participates in geodetic research in Antarctica, using Global Navigation Satellite System (GNSS) instrumentation for atmospheric and geodynamics studies in collaboration with national and international institutions.

In the framework of the Italian Link for Time and Frequency (LIFT) project, a 550-km coherent optical fiber link from the Italian National Metrology Institute (INRiM) to Medicina was realized. The clock reference was delivered from INRiM to the Medicina 32-m dish for the first time in 2015. 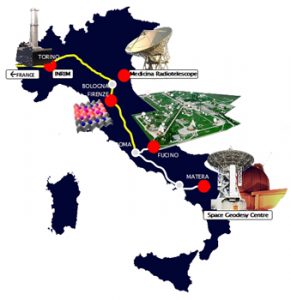 Interferometric fringes were detected and a solution comparable to those obtained with the local clock was achieved. The Metrology for Geodesy and Space project is an offshoot of LIFT and aims at disseminating a highly stable and accurate frequency reference signal to a series of research facilities, reaching finally the ASI telescope in Matera and allowing the first common clock experiment between two Italian antennas. Optical frequency distribution over fiber can improve the measurement capability in astronomical and geodetic VLBI, going beyond the accuracy presently archived by local clocks. For instance, achieving 1-mm positioning accuracy in geodetic VLBI requires knowledge of the clock frequency at the 1×10-16 level.

Concerning marine geodesy, methods have been developed to monitor the seabed deformations down to centimeter accuracy by means of pressure sensors at the seabed and GNSS instrumentation installed on buoys. New tsunami early warning systems and algorithms have been developed and validated in the context of international and national projects. 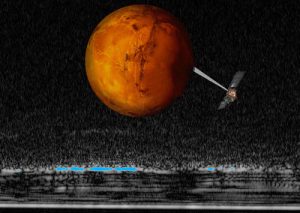 Radars aboard space missions unveiled the surface of planets and satellites that are surrounded by an opaque atmosphere, such as Venus and Titan, and probed below the surface of the Moon, Mars and comets to reveal their interior. In the next decade, a radar will reach Jupiter’s moon Europa to sound through its icy crust and search for a global subsurface ocean that might constitute an environment suitable for life. In the future, similar experiments will be flown also to asteroids, to study their interior and help defining strategies to protect the Earth from impacts. IRA is responsible for the management of the subsurface sounding radar MARSIS aboard the first European mission to Mars, Mars Express, which discovered liquid water under the Martian Southern polar cap. IRA is also involved in the processing and data analysis of several other radar experiments aboard planetary missions, both past, present and future, in collaboration with other national and international research institution. 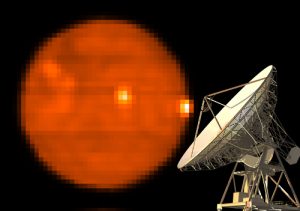 D.  Solar map obtained at 18 GHz with the Medicina dish

With “space weather” we define the environmental conditions found in the interplanetary space within the Solar System, with particular interest in phenomena affecting the Earth. The presence and interaction of radiation, plasma (charged particles) and magnetic fields have effects both on our planet and on numerous technological devices, in particular the orbiting satellites and the ground-based power lines. It is primarily the activity of the Sun, which emits plasma and radiation in a discontinuous and periodically “violent” way, to affect terrestrial conditions. To study these phenomena, instruments placed both in space and on the ground are used. IRA is involved in a pilot project, specifically dedicated to space weather and solar physics, which involves various observation structures at national level. In particular, researchers from our Institute use INAF radio telescopes for the radio monitoring of solar activity, providing valuable data to both study our star and obtain knowledge aimed at developing predictive methods. These are very important to learn how to foresee the occurrence of the more energetic phenomena, capable of having destructive effects on our technologies.
Read more:  Sundish project   –   CESRA 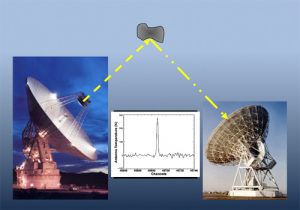 The most accurate method to calculate the orbit of potentially-hazardous asteroids and comets that closely approach the Earth (called NEO, Near-Earth Objects), is to observe them using a radar system. Large antennas are needed to illuminate the target with radio waves and, analyzing the reflected signal, measure its distance and speed, obtain a three-dimensional image and information on its nature. Since the early 2000s, the Medicina and Noto radio telescopes have been participating in various experiments of this kind, playing the role of receiving antennas. Historically this sector has been led by American agencies, in particular the NASA Jet Propulsion Laboratory. Our Institute is now involved in a project of the European Space Agency, whose purpose is to evaluate what instruments and skills are available to the European Union in order to create an independent network, capable of carrying out these monitoring and study activities.