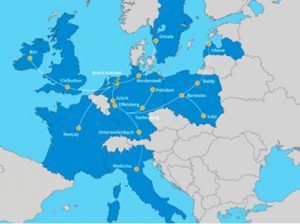 A.  Map of the LOFAR observing stations. The Medicina site is planned to join the array in 2021-22

LOFAR (Low Frequency Array) is a low-frequency radio interferometer composed by observing stations scattered throughout Europe. The array covers the frequency range, largely unexplored, spanning from 10 to 240 MHz with unprecedented sharpness and sensitivity. LOFAR is an international telescope managed by ASTRON through the International LOFAR Telescope (ILT) foundation, as an observatory open to the global astronomical community. In terms of performance, architecture, dimensions and operating modes, LOFAR is one of the natural precursors to the Square Kilometre Array (SKA).

The technology behind LOFAR

LOFAR is based on a series of simple omnidirectional antennas, rather than on the use of large reflector antennas (typically parabolic antennas), connected together by an enormous transmission and signal processing network. Unlike traditional radio telescopes, LOFAR has no moving parts. It is, in fact, made up of thousands of small elementary antennas, which work together thanks to beamforming techniques (at the single station level) and interferometry (between the stations) performed entirely on an electrical or electronic level. This approach allows at the same time to obtain wide fields of view, thanks to the use of non-directive elementary antennas, and high sensitivity, as the low cost of the individual antennas allows their production and deployment on the field in large numbers. There are two types of antennas for each station: high-frequency antennas (HBA, 110-240 MHz) and low-frequency antennas (LBA, 10-90 MHz). To compose radio images of the sky with adequate sharpness, these antennas must be placed in stations located at a great distance from each other. The global extension of the array has now covered a large part of Europe, including (in addition to its central core in the Netherlands) stations in France, Germany, Ireland, Poland, Sweden and the United Kingdom. The high number of antennas requires at the same time high-speed data networks (Terabit/s) and supercomputing processing systems (dozens of Tera-FLOPS), necessarily placing LOFAR at the forefront in both fields. A decade after its inauguration in 2010, LOFAR needs modernization, to guarantee its operations at the highest levels up to 2030. In particular, in the context of the LOFAR2.0 project, the intention is to replace the receiving and acquisition system of the antennas, called RCU (Receiver Control Unit), so as to allow simultaneous observation with both bands/antennas, with great advantage in terms of calibration of the ionosphere in the low- frequency band. The creation of a new receiver also aims at making LOFAR more robust against interfering signals, which are increasing in number due to the introduction of new broadcasting services.

LOFAR and the Medicina Station 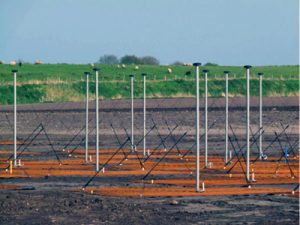 B.  Some of the low-frequency antennas (10-90 MHz) composing LOFAR

The LOFAR.IT consortium, led by INAF and including the Physics Department of the University of Turin, aims to provide Italian scientists with the optimal conditions for accessing and analysing LOFAR data, maximising the scientific impact of their research. Its plans also include the acquisition of a LOFAR 2.0 station, to be installed at the Medicina radio astronomical Station by 2021-22. In this context, IRA technologists are, in collaboration with colleagues at ASTRON, designing the new antenna reception and acquisition boards. The goal is to create two separate boards, called RCU_L and RCU_H, capable of amplifying, filtering and finally acquiring the signals from the respective antennas in the 10-90 MHz and 110-240 MHz bands. The specific requirements in terms of sensitivity, dynamics, costs and consumption make the work comparable to the technological challenge undertaken by the staff of the Medicina Station as part of the SKA-LOW project, of which LOFAR constitutes a precursor.

One of the main issues connected to LOFAR is the management of the so-called ‘Big Data’. Indeed, LOFAR data requires the use of powerful computers that can manage the calibration and analysis of large amounts of information. INAF manages the national computational infrastructure for LOFAR analysis which is distributed in three sites: IRA, Astronomical Observatory of Trieste and Catania Astrophysical Observatory. IRA is the largest of the three sites and is currently composed of 8 computational nodes, 5 of which financed by the European project DRANOEL (PI: A. Bonafede). Each node consists of 48-64 cores and 384-512 GB of RAM. The hub has around 300 TB available for data storage. The most advanced software for analyzing LOFAR data are installed and continuously updated on the computers, including that developed within the LOFAR Key Science Programs. Typically over a hundred TB of data per year are analyzed at the IRA site.