At IRA, a branch of our research concerns our own Galaxy, the Milky Way, and focuses on a range of scientific topics, such as Galactic spiral structure, molecular clouds and star formation across the Galactic disk, the physics and chemistry of the interstellar medium, and stellar and interstellar masers. These lines of research are pursued by making observations with world-class telescopes and instrumentation in spectral regions from the radio to the optical, via millimeter and the infrared. 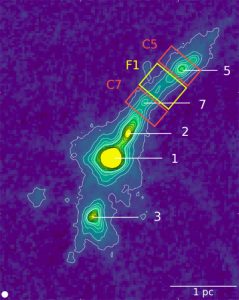 A.  Image of the dust emission in G353.77-0.51, a filamentary star-forming region, observed with the Large APEX Bolometer Camera at 870 micron

Across the Galaxy there are cold regions (10-20 K) where the interstellar gas, mainly composed of molecular hydrogen, condenses to reach particle densities of 1000-10000 cm-3 and higher: these regions are found to give birth to new generations of stars. Since young stars are born inside cocoons of gas and dust, which provide the mass reservoir for the growing star but absorb the visible light, these early phases in the stellar evolution can be mainly studied through radio and (sub-) millimeter observations. IRA researchers make use of the emission coming from increasingly complex molecules which are relatively abundant in the proto-stellar environment, such as NH3, H2CO and CH3OH, in order to understand the dynamical processes and physical conditions taking place at distances from tens of thousands down to a few AU of the young stars. 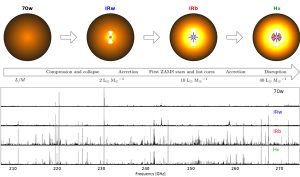 B.  Simplified representation of the different phases of the evolutionary sequence of massive star-forming regions with their associated spectra

The space between the stars is permeated with gas, mostly consisting of hydrogen. The hydrogen gas is mixed with very small quantities of atoms and molecules of other heavier elements, as well as with small amounts of dust particles (silicates, graphite). These constituents are part of the so-called interstellar medium (ISM). The ISM is an important part of a galaxy’s cycle of life, because stars form in and from it, and when they die, their material is recycled for a next generation of stars. Most of the gas and dust in the Galaxy is at very low temperatures (10-100 K), and therefore observable mainly at radio, millimeter and infrared wavelengths. At IRA we study the process of star birth, and we are particularly interested in the physical conditions and chemical properties of interstellar clouds just before and after a star is born: many interesting phenomena are associated with these very early moments in a star’s life. In star-forming regions molecules are formed or destroyed depending on the evolutionary phase of the young stellar objects. By comparing predictions of chemical models with the abundances of various molecules, derived from observations, this information can be used as a clock for the star-formation process, and help to get a better understanding of the network of chemical reactions that take place in interstellar space. 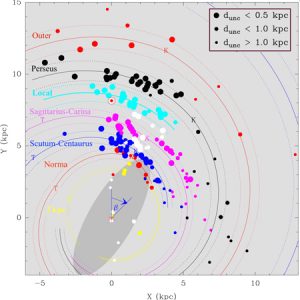 C.  The Milky Way’s spiral structure as it would be seen from above the galactic plane, reconstructed from VLBI astrometry on masers associated with young massive stars (coloured dots)

Most of the molecular gas in our Galaxy is accumulated in the spiral arms, the locations where the most massive stars form. Precise astrometry of the masers associated with these objects can therefore trace the spiral arm structure and create a 3D model of the Galaxy. Very Long Baseline Interferometry provides the positional accuracy necessary to allow distance measurements through trigonometric parallaxes even beyond the Galactic Centre. IRA participates in a large project, called the Bar and Spiral Structure Legacy (BeSSeL) survey, which aims to measure accurate parallaxes and proper motions for more than 200 young massive stars, updating our view of the Galaxy. Furthermore, IRA researchers combine maser parallaxes with Gaia astrometry of stars to study spiral arms and the structure of molecular clouds. 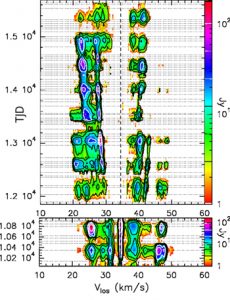 An example of long-term monitoring with the Medicina antenna of water masers in a circumstellar envelope. The diagram shows the evolution in time (days) of the flux density (colour scale) versus line-of-sight velocity (V_los) for the water masers associated with the Mira-like variable star IK Tau during the period 1995-2011

Maser emission from the 616 − 523 rotational transition of water at 22 GHz is a common feature in circumstellar envelopes (CSEs), and highly variable. A water maser monitoring has been conducted with the Medicina dish for decades. In CSEs the H2O masers originate close to the star, in the material expelled by it. The high variability reflects turbulent motions and indicates that the mass loss from the star is not a smooth process. Water masers are therefore well-suited to study changes in the stellar winds, that occur on timescales spanning from years to decades.
Each single-dish H2O maser observation shows a snapshot of the maser activity, but it is not necessarily representative of the general behaviour. However, long-term monitoring can reveal (persistent) profile changes, episodic emission fluctuations, and strong bursts or flares in intensity lasting several (tens of) months. Open questions about stellar masers concern, for example, their lifetime, and how it can be used to study the history of the stellar mass loss.