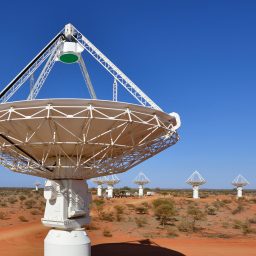 The Australian Square Kilometre Array Pathfinder (ASKAP) is a new generation low frequency (700-1800 MHz) interferometer capable of a wide instantaneous field of view of 30 square degrees which is realised with the Phased Array Feed (PAF) technology and multiple beams on the sky. The telescope has already been in the early science phase for a couple of years with reduced number of antennas and bandwidth, but is now ready for pilot surveys in its full strength. It is able to generate about 200 Tb/day of raw data and produce spectral cubes up to 70 Tb in size (if all the data are used; the current plan is to sacrifice the spatial resolution). The data rate already proved to be a challenge to deal with for various commissioning and early science experiments and necessitated the use of processing pipeline based on ASKAPsoft, a specialised suite of software designed for parallel processing. Designed as a survey instrument, it has different access policies from the other observatories operated by CSIRO. The corresponding science is from a selected number of science topics proposed by the Survey Science Teams in the early stages of the project. I will describe the current status of ASKAP, its architecture and the current approach to address computing challenges, as well as some early science results.