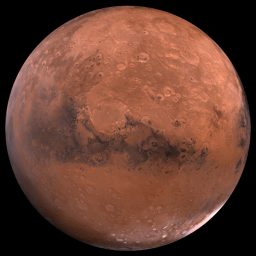 The presence of liquid water at the base of the Martian polar caps has long been suspected but not observed. We surveyed the Planum Australe region using the Mars Advanced Radar for Subsurface and Ionosphere Sounding, a low-frequency radar on the Mars Express spacecraft. Radar profiles collected between May 2012 and December 2015, contain evidence of liquid water trapped below the ice of the South Polar Layered Deposits. Anomalously bright subsurface reflections were found within a well-defined, 20 km wide zone centered at 193 degrees E, 81 degrees S, surrounded by much less reflective areas. Quantitative analysis of the radar signals shows that this bright feature has high dielectric permittivity > 15, matching water-bearing materials. We interpret this feature as a stable body of liquid water on Mars.